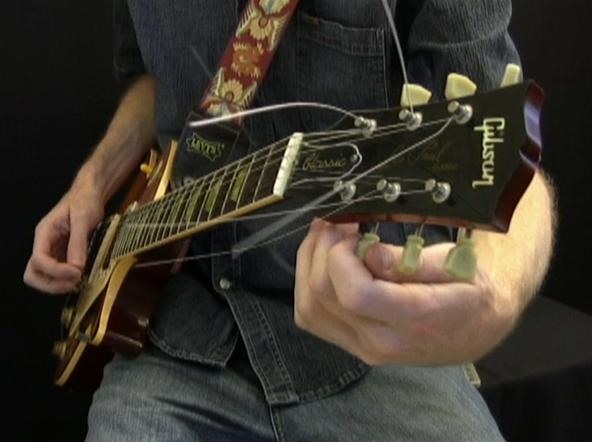 When some new guitarists break their first string they stash it in the closet and forget about it. Me, I put the sweaty axe back in its case and asked my parents to take me to the local music store. After a morning full of senseless racket emanating from my bedroom, my mom welcomed the drive.

A new guitarist probably has not yet noticed the difference in sound quality between a new string and the old gritty ones still gasping on to the tuning pegs. As an experienced guitarist, I cannot bear to have a mixture of old and new on my guitar, but I remember the first couple of years where I would go to the music store and buy one new "e" string for $1. When I got home after my big purchase I would string it up and then five minutes would pass by and the "b" string would pop off.  I learned the hard way that when one string breaks (unless you just put it on), they all are about to go. Which is just as well because a complete set of fresh strings will bring back a nice tone to your guitar.

The process of changing guitar strings is not hard, but the first couple of times you do it you're bound to make a few mistakes. So let's take a look at my method to help you get started off right:

Step 1 Lay it down

First, lay your guitar on a surface, like a bed, your lap or a table. You can use a cloth or towel to put under the guitar, so that it does not get scratched. If the headstock of your guitar is built at an angle, make sure that it is not resting on the surface with the body of the guitar.

Now, start unwinding the sixth string using its tuning peg. Notice when the string becomes loose enough to remove it from the peg and carefully pull it out.

Check to make sure that the string rests in place on its saddle and on the nut. Holding the string in place with one hand, its time to wind the string with the other. Using your fingers or a string winder, turn the tuning peg counter-clockwise. Turn the string until it becomes tense enough that you no longer need to hold it in place.

Now, repeat these steps on the rest of the strings. After you have finished changing all six strings, tune the guitar. Gently stretch the strings by pulling up on each one individually and then tune it again.

Now cut off the excess string and enjoy.

Want to master Microsoft Excel and take your work-from-home job prospects to the next level? Jump-start your career with our Premium A-to-Z Microsoft Excel Training Bundle from the new Gadget Hacks Shop and get lifetime access to more than 40 hours of Basic to Advanced instruction on functions, formula, tools, and more.

Other worthwhile deals to check out:

Join the Next Reality AR Community

Get the latest in AR — delivered straight to your inbox.